Our research agenda in the Tłı̨chǫ region has historically been broad in scope covering a variety of research interests covering the environment, health and wellness, and Tłı̨chǫ language, culture and way of life.  The number of projects we are able to support is steadily increasing as we build the capacity to move beyond only being able to support the research interests of other organizations and individuals, to identifying, planning and implementing the research that is of most value to people in our communities and to the Tłı̨chǫ Government.

Kwetı̨ı̨ɂaà, also known as Rayrock, is a former uranium mine built in the 1950s approximately 145 kilometres northwest of Yellowknife. It has been a site of monitoring and remediation activities of the Tłı̨chǫ Government for many years, and in 2018, the Tłı̨chǫ Government is launched its Kwetı̨ı̨ɂaà Traditional Monitoring Program, with the goal of restoring Tłı̨chǫ confidence and use in the site.

Ekwǫ̀ Nàxoèhdee K’è: Boots on the Ground is a caribou monitoring program based on the traditional knowledge of the Indigenous elders and harvesters. Faced with challenges from the decline of the Bathurst caribou herd and a self-imposed ban on caribou hunting in 2015, the Tłı̨chǫ Government initiated Ekwǫ̀ Nàxoèhdee K’è (the program) to collect critical field knowledge of the Bathurst caribou herd and its habitat. It is a multi-year traditional knowledge monitoring program for the Bathurst caribou and monitor the conditions of Bathurst herd’s summer range by focusing on indicators: (1) caribou habitat and environment, (2) caribou, (3) predators, and (4) industrial disturbance.

This graduate student research project created an evidence-based plan for a comprehensive diabetes program tailored to meet the needs of each Tłı̨chǫ community as well as a foundation of knowledge about diabetes self-care, prevention and treatment with Community Health Workers and other community members. This process also included the development of a curriculum to train two people from each community to become certified community diabetes educators (CDEs). The curriculum was designed to meet national standards while fitting into a Tłı̨chǫ community wellness framework.

Whose North? The Intersection of Sovereignty between Indigenous Nations and the State

This research focuses on studying the intersection between the sovereignty of Aboriginal Nations and Canada. It builds upon an MA thesis in Indigenous Governance “The Tłı̨chǫ Agreement and Small Acts of Freedom: From Self-Government to Self-Determination”, which positions the Tłı̨chǫ Agreement, a modern treaty between the Government of Canada and the Tłı̨chǫ, as an instrument facilitating the eventual exercise of Indigenous self-determination. This research demonstrated that the Tłı̨chǫ are using the new political space created by self-government, as a framework for decolonizing by protecting, recovering, revitalizing, adapting and operationalizing ways of being that are uniquely Indigenous.

Tłı̨chǫ Use and Knowledge of ɂewaànıt’ııtı̀

This report describes the Tłı̨chǫ Traditional Knowledge (TK) study of the area encompassing Seabridge Gold Inc’s exploration project at ɂewaànıt’ııtı̀ (Courageous Lake). The purpose of the TK research was to identify Tłı̨chǫ use and knowledge of the ɂewaànıt’ııtı̀ area. The Tłı̨chǫ Government will use this report in the environmental assessment process for the proposed gold mine at ɂewaànit’iitì.

On September 19 to October 2, 2014, the Tłı̨chǫ Government, in partnership with the Prince of Wales Northern Heritage Centre and the Canadian Polar Commission hosted a multi-event symposium to advance the understanding and uses of Traditional Knowledge in Canada’s North and in the nation as a whole.  The Festival comprised a number of inter-locking events: A traditional afternoon gathering in Behchokǫ̀ in honor of Aboriginal elders with a focus on the contributions of traditional knowledge to the structure and programs of the Tłı̨chǫ Government, “TEDx Sǫǫ̀mbak’è”, a one-day TEDx event,  and a one-day scholarly symposium  at the Explorer Hotel in Yellowknife, a TK exhibition including booth displays, cultural demonstrations and a book fair and a mentorship program at the Prince of Wales Northern Heritage Centre for northern graduate students.

Hozi Deè: By Canoe from Gamètì to Gots'ǫkàtı̀, and back.

The Tłı̨chǫ have always travelled long ways to maintain their traditional way of life and their network of trails cover their entire traditional land use area. From August 22nd to September 9th 2014, four canoes went on a 18 day return trip from Gameti to Gots'ǫkàtı̀ on the barrenland, to revive and open up the old canoe trail. This project stems from the community members desire to revive the network of traditional trails and the associated important cultural places. Part of the project, was to strengthen the language and cultural knowledge of younger generations. Of the 23 participants, 16 were young persons who learned from the elders who know the land travelled through. A documentary will be produced of the journey to the barrenlands and the elders’ teachings. 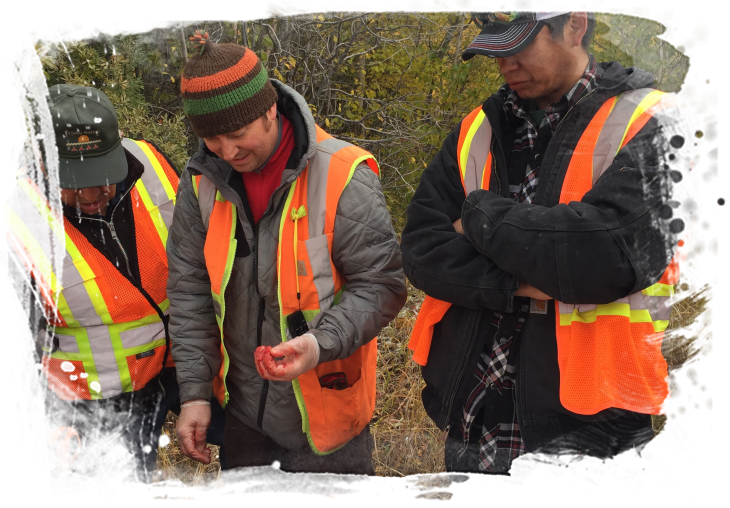